It’s said all too often in corny travel movies or wispy travel documentaries, “it is the journey that matters, not the destination”. The same can be said when wildlife watching, it’s about the experience of being in an untouched ecosystem rather than the animal sightings themselves. Sure, when you go on safari you expect to see the Big 5, but often the most incredible wildlife encounters can be the colours of the flowers in bloom, the family of meerkats fighting a cobra or the anteater sniffing its way through the undergrowth. Nothing sums up this mantra more than my hike through Periyar National Park in Thekkady, South India.

I journeyed from the cultural heartland of South India, Tamil Nadu, on the eastern front. A highlight in itself, the astounding ancient temples and well-preserved cultural traditions of Tamil Nadu make for a stark contrast to the more relaxing, coconut tree adorned western state of Kerala. To reach the canals and beaches of Kerala by car from the west, you must travel through the Western Ghats mountain range.

The Western Ghats is a wildlife hotspot, literally! It forms part of one of the planet’s Global Biodiversity hotspots, recognized for their high level of species richness and endemic species (meaning many of the species there are found nowhere else!).

Naturally, this level of intrigue attracts wildlife enthusiasts to Thekkady, nestled amongst peaks of spice plantations and tropical forest. It is known as the gateway to Periyar National Park and is the destination of my wildlife walk.

How To Get To Periyah National Park

There are a number of ways to venture into the park, the most popular being the double-decker passenger boats. My first day in Thekkady I decided to try the boats in order to see how things had changed since the 2009 boat disaster there, which unfortunately led to the death of 45 people. The experience may have become safer, but it was not an enjoyable safari.

Waiting for the boat was a stressful experience, with a crowd of 100 people herded onto each boat. The hour long boat ride takes you around the large lake in search of wildlife, where we saw bison, sambar deer and a plethora of birds.

Due to health and safety concerns, we were not allowed to go to the edge to take photographs of wildlife, making it a real lottery whether you would get a good seat for seeing things, especially if you were unlucky enough to be seated on the lower deck.

Although I saw some wildlife and I could see what the park was trying to achieve here, I felt the boat tour was poorly managed and lacked any sort of guiding or information throughout the tour. Therefore, I decided to give the walk a go the next day.

I met our guide and group in the car park where buses depart into the park. Rather than hop on a bus like the other many tourists, we were led to a little wooden hut nearby. Here, we had our safety briefing and were given our lunch and fashionable leech socks, which I would later find out, would be essential.

The Hiking Through Periyar National Park

Our small group of six set off with our two guides, walking directly into the park. As the forest became denser, we continued on the forest path, listening to our guide explain the species which call it home; Nilgiri langars, Indian giant squirrel, Barking deer, Asian elephants and Malabar grey hornbill to name a few.

The gun he was carrying in case of a tiger encounter, but this was unlikely, of course, as tigers are inconspicuous creatures. The pleasant walk was easy along a forest path, but the thrill of being in tiger country added excitement in the air. The adventure continued as we veered off piste and jumped over small brooks and through the undergrowth.

After about an hour, we reach a wooden pontoon overlooking a lake. The calls of exotic birds and the trumpet of elephants signalled our arrival as we sat down for lunch. So far leech-less, we happily eat our lunch of curry and rice whilst enjoying the stunning view, with no other tourists in sight.

I am very relaxed, a complete contrast to the drama of getting on the boat yesterday.

The universe was sure to let me regret thinking how serene I felt, as one of the group suddenly shouted “LEECH!”. We look down to see our leech socks being attacked by a couple of leeches, which must have been hiding and waiting under the chairs.

After a silly dance by all of us to remove the leeches, with the guides probably internally laughing at the fuss we were making, we step onto the bamboo rafts floating on the water’s edge.

Gliding on the lake in these silent rafts, I feel immediately peaceful and relaxed once more.

We floated around in complete silence for an hour or so, taking in the atmosphere of the tropical forest ecosystem. We didn’t spot much wildlife but instead, lovely scenes of local tribes people fishing or washing in the waters. Before we knew it, we were returning to the pontoon. Upon returning (the way we came), we were treated to a troop of langars playing and an Indian giant squirrel foraging on fruit.

South India is quieter than the notorious north, but there are still only a few places you can reach this level of silence and serenity. I do recommend anyone visiting Periyar to take the hike through the park and bamboo raft instead of the usual tourist boats.

Also note: This option is as long as you aren’t squeamish around leeches!

Meike’s zoological background and travel career have given her the opportunity to explore the big questions behind these issues through blogs and vlogs.

If you would like to read more articles from Meike, then check out the following articles:

« Previous Post
A Guide to Van Life - Tips & Tricks
Next Post »
What To See And Do In Thun, Switzerland 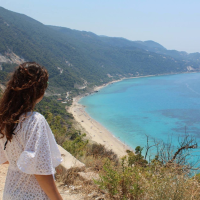