The Inside Passage Expedition

A few years ago myself and Nuka marked the inside passage for our kayaking expedition. With lots of planning, pandemic set backs and plenty of excitement we set up finally took to the water on our kayaks this summer.

We wild camped along the shores, were welcomed by local first nations and experienced close encounters with an unbelievable amount of wildlife. During our trip we had so many wonderful experiences but below I’ve brought you my favourite stand out moments from the Inside Passage.

Our expedition started at Lund in British Coloumbia and lead us approx 1300km km (808 miles) to our finish point of Skagway in Alaska. The expedition took us 72 days for us to complete. If you would like to see footage from our trip keep an eye out on our youtube channel For Funs Sake here.

Being Bumped by a Killer Whale Whilst Kayaking The Inside Passage

Leaving Telegraph Cove on the north end of Vancouver Island, hardly 10 days into our expedition, I see the unmistakable shape of a killer whale dorsal fin. “Orca! Orca! Orca!” I shout. It was a calm day, hardly a lick of wind and no swell. The ocean was as flat as a lake. The killer whales briefly surfaced when I saw them then took a dive, giving us time to prepare ourselves with our cameras. We were making our way across a bay, aiming for the point on the other side. The killer whales were seemingly aiming for the same point, meaning they were about to move right in our path.

We sat there, cameras in hand, eyes focused, patiently waiting. They surfaced. One… two… three! Then more. A calf appeared too. There must have been at least 6 or 7 individual killer whales in this pod. It had been 3 years since I’d last seen a killer whale. We were both in awe of what was happening, to be so close and on such a calm day.

“An orca just went right under my boat”.

In the corner of my eye, I see Nuka’s (my expedition partner) boat wobble. I look to my right. There’s a ripple in front of him. It’s moving forward, getting larger. Then, just metres away, the ripple bubbles apart and a huge, adult killer whale surfaces directly in front of us. My eye’s widen, mouth drops. My heart is pounding in my chest. Neither of us can believe what has happened. This killer whale had moved out behind us and approached where we weren’t looking. Then, gently and delicately, it passed underneath Nuka’s boat and gave him a tap. It wasn’t an aggressive tap. This is a powerful animal and if it wanted us in, it could have done so easily. This was more of a ‘hey I’m here’, tap. Just letting us know who’s in charge.

Bubble Net Feeding For The Humpback Whales Along The Inside Passage

McKay Reach is an incredibly deep channel cutting above Princess Royal Island. At low tide, the beach gives way to what is essentially an underwater cliff. The bay itself is beautiful, with two powerful waterfalls bellowing down from the mountain tops. A fine spot for two weary kayakers to make camp.

In the morning whilst walking back towards camp, I hear the unmistakable BOOOSSH of a humpback blow. It was so close to shore. I shouted, “Whale!” for Nuka to see. He was at the other end of the beach and missed it. As I’m explaining to him what happened, I see over his shoulder three humpback whales surface vertically with their mouths wide open. They must of come 15ft out of the water.

This is called ‘bubble net feeding’. One whale blows bubbles whilst moving in a circle underwater. The bubbles lasso fish together like a net. Then, all the whales lunge upwards with their mouths wide open in perfect synchronicity to catch the fish. It’s something I knew about and had seen videos of, but this was the first time ever seeing it myself.

We decided that we’d have a slow morning. Taking advantage of the low tide, we positioned our chairs as close to the water’s edge as possible without getting our feet wet and poured another coffee. A truly remarkable event to witness in any form, but to see the humpbacks use their bubble net feeding technique within 10m of shore had us lost for words.

Welcomed By First Nations Chief On The Inside Passage

When passing through Klemtu, we were put in touch with a man named Doug, the Chief of the Kitasoo Xai’xais nation. He kindly welcomed us to their land, told us to enjoy it, explore and help share the natural beauty of the surrounding area. He was incredibly generous, he gave us a place to stay and invited us for a drink with him that evening. Doug had spent a number of years working as a grizzly bear guide and told us about an inlet that we could find them. It’s a place I had been told about before, but have been sworn to keep the name secret in order to protect it from over-tourism. He offered to give us a lift there.

The next day, we are loading our kayaks onto his boat, alongside his canoe and his colleague Brady, who’s also a grizzly bear guide. This boat trip saved us 50km of paddling – approximately two days – which was a helpful boost for us and allowed for more time exploring the inlets. As we arrive, I ask Doug what the chances are of seeing a grizzly bear today. “100%”, he said.

As Doug and Brady set anchor, I scan the horizon with the binoculars. Sure enough, out in the middle of the grassy meadow is a big, round, brown lump. It’s a grizzly. We unload the boats and paddle in for a closer look.

The bear is happily chomping away at the long grass. Completely unbothered by our presence, we sit and silently observe for some time. It’s approaching lunchtime and at Doug’s suggestion, we get out on the meadow, the same meadow that has at least two grizzlies on, and take our lunch break.

It was a surreal experience. To be so close to the animal that I had been the most fearful of. However, through Doug’s lessons, I was put at ease in their presence. They aren’t looking to harm you and as long as they are left alone with as much space as possible, we can visit them respectfully.

Chris is a kayak guide, snowboard instructor and founder of Global Shenanigans. You will find him leading group on expeditions with local guides kayaking around Sicilian Islands, Baja and Hiking up Kilimanjaro. Between this Chris is ripping up the slopes on his board, writing for travel magazines or capturing amazing photography in remote spots around the world.

You can also follow For Funs Sake (FFS) instagram here to see more of Chris and Nuka’s expedition kayaking the inside Passage. 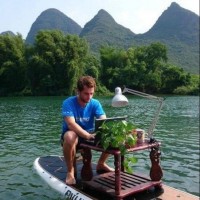